Working with their cities, large corporations and public institutions are leveraging local spending to create healthier communities and a wealth of new consumers.

Khalif Thomas makes socks. His company, Rock Ya Socks LLC, based in Newark, got its start designing screen-printed socks for local high schools. Then one day his aunt was a patient at Newark Beth Israel Medical Center, where he noticed she was wearing a pair of hospital-issue no-slip socks. “I grabbed the socks off her feet and said, ‘These feel like paper.’” He saw an opportunity.

After a successful patient trial, Rock Ya Socks became the sock supplier to Beth Israel last November, with a two-year contract. “Our first day, November 25, we shipped 4,900 pairs of socks,” he says. He now has a staff running three sock-knitting machines in Newark and four machines in North Carolina; he’s renovating his 4,700-square-foot facility in Newark so he can bring them all together; and he’s not stopping there. “We’re meeting to get introduced to four other hospitals,” he says. “I’m trying to have a 24-hour operation. That’s the goal.”

This is how anchor institutions— big organizations like hospitals, universities, cultural centers, and large corporations, in Newark and anyplace else—use their purchasing power to support the local community and create new customers for their goods and services. Rock Ya Socks is just one example of the program Mayor Ras Baraka has set out for Newark, dubbed “Hire. Buy. Live.”

“Big institutions spend a lot of money,” says Kim Zeuli of the Initiative for a Competitive Inner City (ICIC). “The theory is that if you can get them to shift even a bit of that spending to local businesses, you would grow those businesses, create new businesses, and help the local economy.” Another research group, Civic Economics, has found that about $68 of every $100 spent at a local business stays within the community, versus $43 of every $100 spent at a big-box chain.

An ICIC study, supported by Prudential and fundamental to Mayor Baraka’s “Hire. Buy. Live.” Initiative, identified 19 anchors in Newark that together spend over $1 billion. Looking at just six of the biggest, the study found $400 million in spending that could have been directed to local businesses. Some purchasing already happens in Newark, but the study found that if these six large anchors committed 10 percent of their aggregate spending to Newark-based businesses, that would mean an additional $33 million in revenue to local businesses every year.

Before anchors agree to spend their money at local businesses, of course, local businesses need to be able to serve their needs. That’s why Rock Ya Socks wants to add more knitting machines. The ICIC study identified specific industries in which Newark businesses were well-positioned to serve the anchor institutions, and since then programs have been put in place to help small businesses to do that at scale.

“We have a center for urban entrepreneurship and economic development at Rutgers-Newark that does a lot of business-capacity work with local entrepreneurs,” says Nancy Cantor, the Rutgers-Newark chancellor and an expert on anchor institutions. “You may have a caterer who’s got three employees. How does Rutgers-Newark both give that caterer more capacity training and figure out the right kinds of procurement contracts, so they can become a six-person caterer?”

Kevin Lyons, a professor of supply-chain management at the Rutgers Business School, is focused on Newark’s manufacturing economy, and on connecting Newark anchor institutions with Newark businesses equipped to serve them. With Rutgers’ Private Public Community Partnerships program, he is about to launch a web-based tool that will guide anchors’ procurement dollars to local businesses that can serve them. “It uses a Google map of Newark, and it plots these businesses and activity,” he says. “If you hover your cursor over one of the dots, it’ll show you the name of the company, who they are, and their capacity.” He connected Rock Ya Socks with Beth Israel during a trial of his project. 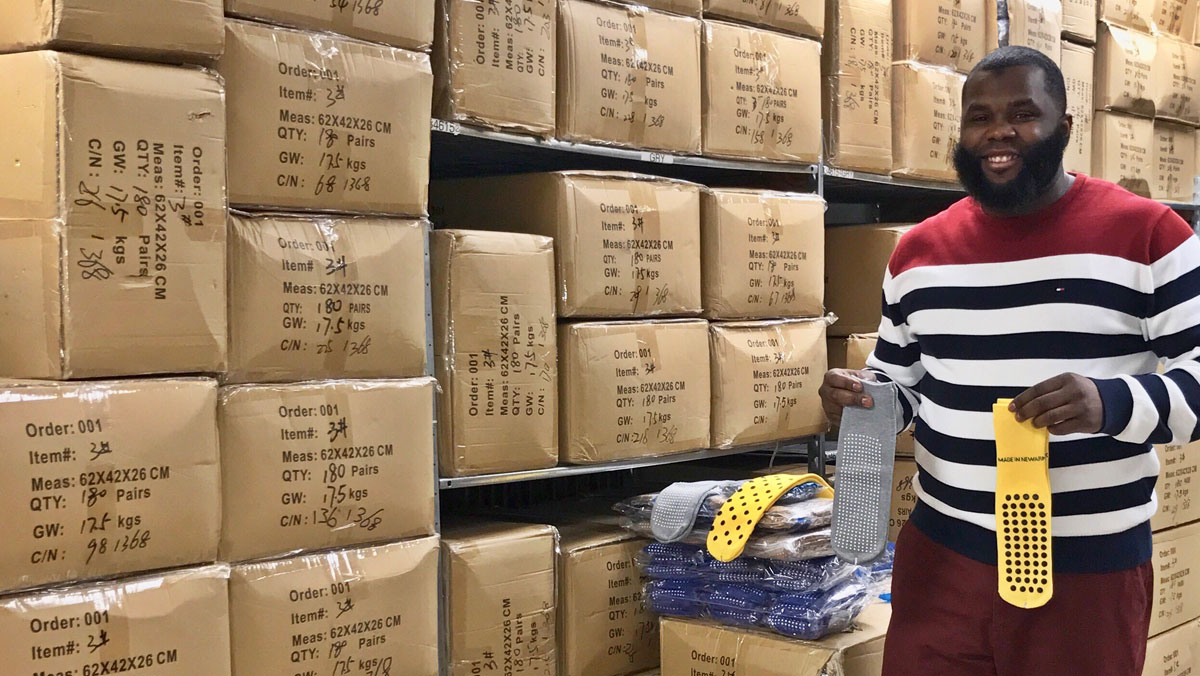 A model that works

Newark’s local-procurement efforts are just kicking off. But it’s a strategy that’s been proven successful elsewhere.

The West Philadelphia Initiatives, launched in the mid-1990s, were efforts by the University of Pennsylvania to boost its struggling neighborhood. As a PolicyLink study prepared for Newark noted, Penn was able to boost local spending from $1 million in 1986 to $90 million in 2007. They did it, at least in part, by prioritizing local spending and incentivizing procurement officers to buy local. They also worked with local businesses to build their capacity, directing some smaller local businesses to the Minority Business Enterprise Center at its Wharton School of Business for training and assistance.

In Cleveland, the Greater University Circle Initiative (GUCI), launched in 2005, is a similar effort to use the resources of 17 large cultural, educational, and medical institutions to improve the struggling neighborhoods surrounding those institutions. By 2012, those anchor institutions spent 28 percent of their combined $3 billion in purchasing on suppliers within Cuyahoga County, where Cleveland is located. To help shift more spending into GUCI’s immediate neighborhood, the initiative helped found the Evergreen Cooperatives in 2009, which are worker-owned businesses that employ area residents and serve the anchor institutions. By 2014, the cooperatives boasted $6.3 million in annual revenue and more than 100 employees.

Coming next to Newark

Newark’s anchor initiatives are unusual in that they include public corporations, like Prudential Financial, not just traditional nonprofits. While institutions like hospitals and universities are firmly and practically embedded in a city, the ease with which a corporation can relocate has made the anchor strategy less common in the corporate world. And although Newark’s overall buy-local plan isn’t yet in full swing, Prudential, headquartered in Newark since its founding in 1875, is already focused on keeping its procurement dollars local.

“The support of Newark as a city and a growing, thriving environment is embedded in our diversity and inclusion strategy,” says Nathan Ayres, Prudential’s vice president for strategic sourcing. “We’re in Newark for a reason, therefore we’re going to try to promote local, Newark-based business whenever we can.”

Prudential’s goal is to direct at least seven percent of its total procurement spending to vendors that are diverse, which includes local Newark based firms as well as firms owned by minorities, women, veterans, disabled or LGBT individuals. Between 2014 and 2016, Ayres says, Prudential increased spending on Newark-based organizations by 131 percent, in part by using local construction companies to support the construction of the new Prudential Tower. Now that the tower is complete, Ayres is committed to supporting and seeking what he calls “sustainable” local business relationships. One example is Newark-based Gateway Security, with which Prudential increased its business by more than 50 percent from 2014 to 2016.

Contracts like these don’t just support Newark businesses, they also support Newark jobs. That’s why Khalif Thomas is trying to line up more hospitals to buy socks, and planning to move all his manufacturing into Newark. “We want to be the only sock manufacturer based on the East Coast,” he says. “That’s my ultimate goal, to hire people in Newark.”