Financial Challenges of Being a Military Spouse 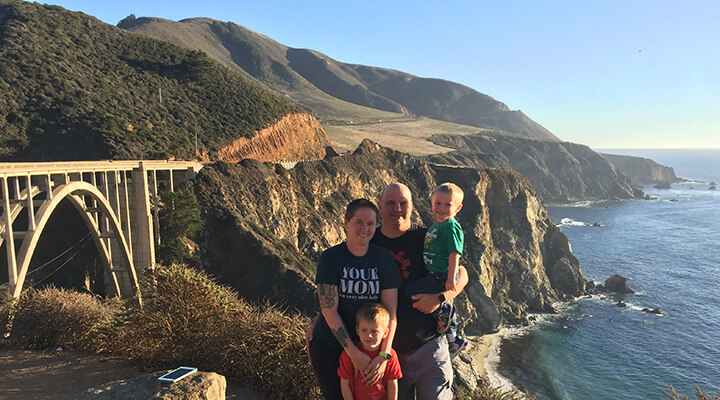 Photo courtesy of the Binko family

As the spouse of a cryptologic linguist in the U.S. Army in Monterey, California, the logistics of home and family fall mainly to Matthew Binko, 46. Along with that responsibility comes managing a complex financial system unique to military households.

Take deployments. When his wife Sarah, 27, spent six months in Kuwait in 2014, Matthew became a single dad to the couple’s two sons, Matthew Jr., 6, and Luke, 4. By leaning on family and friends, Binko was able to lessen the financial strain.

But others don’t have such support networks, and can easily blow through significant sums paying for childcare and other domestic services.

Over the years, Binko and other military spouses have developed ways to manage the financial challenges the armed services throw their way.

One of the biggest challenges for military spouses, says Kate Horrell, a blogger at the Paycheck Chronicles at Military.com, is career development. “For the longest time, the military assumed that the spouse would be a stay-at-home parent,” she says. “Military life really does not support a two-career kind of thing.”

When Horrell and her husband, a Navy intelligence officer with 24 years under his belt, first had a family, she was a stay-at-home mom. His rigid schedule and periodic deployments made it difficult for her to work and care for their four children, now ranging in age from 14 to 18. What’s more, frequent moves made it next to impossible to advance with one employer.

“It’s really hard if you have a specialized career,” she says. “For example, if you’re a lawyer. By the time you were to take the bar in another state, you are getting ready to move again.”

What to do: Consider a mobile career. Horrell, like Binko, is a software consultant who works remotely. Her job, which she’s had since 2008, has followed her through four moves. To develop their careers, military spouses might want to take advantage of scholarships, mentoring, resume- writing programs and job fairs sponsored by the military.

After nine moves over 24 years, Horrell has the process down to a science. She knows just what it takes to manage a smooth move, and to minimize the financial strains, including the potentially high costs of the move itself.

Though the military covers the cost, reimbursements don’t always come through promptly, she says. At times she’s had to wait up to six months for a check.

“If you are young and newlywed and barely scraping by, that’s a big problem,” she says.

What to do: First, make sure you have an emergency savings account. Horrell stresses the need for having cash on hand to deal with moves, so you aren’t left short as you await the reimbursement check.

“The opportunity to make money when you live in a place for two to three years is pretty slim,” she says.

What’s worse is that families might find themselves unable to break even if they happen to be moving during a real estate slump.

The Binkos have chosen to live on base because, in California’s pricey Central Coast, they would not be able to afford the amount of space the military has provided them.

Deployments are another area that must be managed carefully.

Whenever her husband was deployed overseas, Horrell’s childcare budget mushroomed, because she was the only parent in the household.

“I must have put three or four babysitters through college,” she says.

But for the Binkos, deployments have been “a real opportunity to save money if you do it right,” says Matthew.

What to do: For one, you might want to consider ditching your car, if you can manage without it. When Sarah Binko was in Kuwait, they put her car in storage and stopped paying the insurance. That move saved them about $1,000.

For the spouse of a military member who has been deployed, all meals and snacks are provided for free on the base. And for military members who deploy to a war zone, earnings are tax-free.

Matthew Binko got help with childcare from the community of other military families. “They will help you when you need it, as long as you help them when they need it,” he says.

Without steady employment that includes employer retirement benefits, military spouses might find themselves at a disadvantage in retirement.

For spouses who don’t work, a spousal individual retirement account is vital, says Horrell. Like a regular IRA, spouses of military wage earners can contribute up to $5,500 a year (or $6,500 for those who are 50 and older).

“A spousal IRA is the best love note a spouse can give,” Horrell adds.

While that’s a good start, it may not be enough.

Service members have enviable pension plans that provide 50% of their pay, but only if they retire after at least 20 years.  Unfortunately, many do not make it to the 20-year mark, Horrell notes. Around 81% of people who join the military leave without a retirement benefit, according to the Department of Defense  (as of August 2016).

What to do: Horrell stresses that military members—and their families—should look beyond the pension and the spousal IRA program.

Like other federal employees, military members are eligible to contribute to the Thrift Savings Plan, a retirement savings program with a well-managed menu of low-cost investment options. The maximum contribution limit is $18,000 a year (or $24,000 for those 50 and older), and this can be used to help build a retirement nest egg.

Military service is one of the greatest sacrifices a citizen—and his or her family—can make. But the decision to pursue a military career has financial consequences, and not just for the active military member. To lessen the financial burden, take advantage of all the programs the military has to offer, and be cautious when it comes to handling frequent moves.