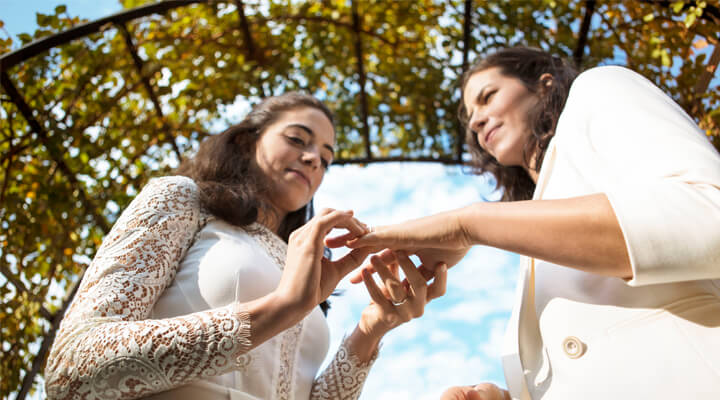 For lesbian, gay, bisexual or transgender couples, legal marriage at one time may have been a far-off dream — even as it has been an option that heterosexual couples have long taken for granted. But since same-sex couples were given the freedom to legally marry, they may also have unique challenges trying to reach their financial goals.

The Prudential research found that LGBTQ+ Americans largely share the same concerns about their financial futures as the general population — a shift from Prudential’s first survey of the LGBTQ+ community, when basic rights issues were top of mind. In 2015, the Supreme Court ruled in Obergefell v. Hodges that every state must permit same-sex marriages as a result of the case.

Marriage equality has simplified finances for many, giving same-sex couples the ability to file joint tax returns, list partners on health insurance, pay health benefits with pretax earnings, and ensure a spouse’s interests are protected in the event of death.

But even though federal laws recognize same-sex marriages for tax purposes, the availability of some federal benefits to same-sex spouses are not as clear. Civil rights legislation that protects the LGBTQ+ community from discrimination in housing, employment and credit has been passed in many states — and the Supreme Court just ended workplace discrimination Opens in new window across the board — but penalties still exist for domestic partners when applying for Medicaid, Social Security and pension plan survivor benefits.

An LGBTQ+ married couple may face unique financial issues in the following areas in particular:

Here’s a quick financial review for couples based upon the 2015 Supreme Court ruling.

Many LGBTQ+ couples believe that their current savings will adequately meet their retirement needs, but often the loss of pensions and Social Security survivorship benefits is not factored into their plans. Even for same-sex spouses, Social Security spousal benefits are not guaranteed. If one or both spouses have a pension plan at work, whether it’s a defined plan or a 401(k), they’ll need to investigate if, and how, they can name their spouse or partner as a beneficiary. Some employers recognize same-sex marriage or other partnership arrangements, but others do not.

For heterosexual married couples, if a spouse is in a nursing home and applies for Medicaid, a healthier spouse can remain in the couple’s house if it is jointly owned. However, in a same-sex marriage, a healthy partner cannot remain in a jointly owned home unless he or she buys out the ill partner’s share of the home. Medicaid treats the home as an asset that must be “spent down” before coverage begins. In many instances, a spouse may be eligible for food stamps before becoming eligible for Medicaid.

This is why long-term care insurance should be evaluated when LGBTQ+ couples prepare for the future. It covers care generally not included with health insurance, Medicare, or Medicaid. Individuals who require long-term care are generally not sick in the traditional sense, but instead, are unable to perform the basic activities of daily living (ADLs) such as dressing, bathing, eating, toileting, continence, transferring (getting in and out of a bed or chair) and walking.

Same-sex married couples have the same opportunity opposite-sex couples have when trying to insure against the premature loss of either spouse. Life insurance not only has the ability to replace lost earnings, but can be used to pay for the college education of children in the event of a spouse’s death, or other expenses. One thing for LGBTQ+ couples to remember is that naming a beneficiary for their life insurance policy is critical — it designates who will receive the policy benefit.

Life insurance can also be used to ensure an adequate level of money for the retirement of a widow or widower. This can be important if a deceased spouse has not had time to accumulate enough assets in a 401(k), or build up a sufficient Social Security benefit, to ensure the spouse’s financial security in retirement.

The ruling that recognized same-sex marriages as civil unions heralded the beginning of a new era. LGBTQ+ couples still face unique financial challenges, but if they start thinking about the solutions that are right for them, they can be ready.