Be Your Own Boss: How to Start a Small Business

Money isn’t the primary reason U.S. entrepreneurs cite for why they want to launch a business. Even so, money certainly plays a role in why people don’t launch a business — and why many businesses they do launch go under. 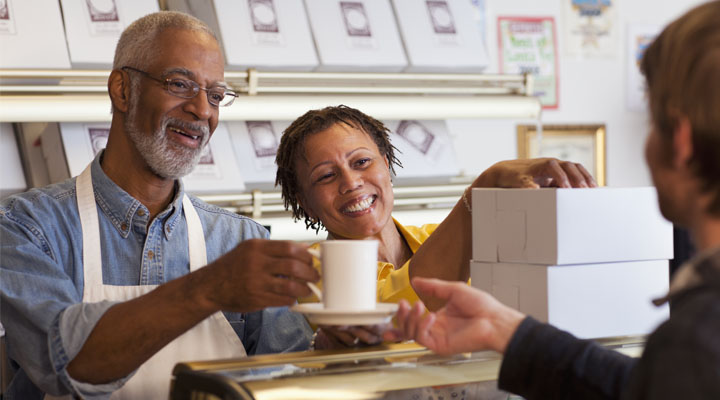 Roughly 400,000 new businesses are launched in the U.S. annually, according to the latest figures from the Small Business Administration. Two-thirds of founders are motivated by the desire to be their own boss and to build something from the ground up, according to a 2013 survey by Cox Business (only 8% gave wealth as a motivating factor).

But other would-be entrepreneurs are holding back. One-quarter of Americans have considered starting a business but decided not to, according to a 2014 Gallup Survey. The top reasons they give: They prefer the security of a steady income, and they don’t have enough savings to start a business.

Concerns about money are realistic, since failure rates for small businesses are significant — and insufficient startup capital and cash flow shortages are some of the most common reasons those businesses fail. In fact, about 20% of new businesses close within a year, and half close within five years. “A lot of times people underestimate what they need, and spend money on what they don’t need,” says Michele Markey, who teaches entrepreneurship in conjunction with the Ewing Marion Kauffman Foundation.

On the other hand, one-third of small businesses are still going after 10 years. So if you aspire to join that club of successful entrepreneurs, here are suggestions for how to make wise use of the money you put in.

Start with a plan

You won’t really know how much money you’ll need to start your business, say small-business experts, unless you actually come up with a business plan that covers key elements such as expected costs, potential customers, product pricing and anticipated revenues.

Happily, numerous free resources are available to help you figure that out and put together a business plan. Some noteworthy ones:

In general, the more employees, equipment, and real estate your business needs, the higher the startup costs, says Michelle Somes-Booher, director of the Wisconsin Small Business Development Center at the University of Wisconsin-Madison.

At the same time, says Markey, it’s important to focus your spending only on what’s necessary to get your product or service to market—not on things that won’t make you money. “There’s a reason that people start businesses in their garage as opposed to a corner office,” she says. As part of that strategic spending strategy, she says, you need to conduct market research and listen to feedback from your customers before sinking a lot of money into product inventory. “You can save up and have a pot of cash,” Markey says, “but until you’ve learned and explored and iterated based on what your customers say, you really don’t know how much money you’ll need.”

You need to conduct market research and listen to feedback from your customers before sinking a lot of money into product inventory.

A financing guideline SCORE volunteer Antara Dutta suggests has two parts: One is to make sure that you have access to three years’ worth of personal living expenses, since early on in your business you probably won’t be able to draw much of a salary, if any.

The second part of Dutta’s guideline is to have enough money to cover 18 months’ worth of business expenses — what you’d need to keep your doors open without putting any revenue back into the business. That second number, she says, accounts for people’s tendency to overlook that their business will have negative cash flow upon starting up.

Taken together, those estimates for personal and commercial funds “should be the absolute bare minimum you start your business with.” Dutta also suggests that, six months into your business launch, you assess your progress; if you’re not on track, it’s time to recalculate how long it will take you to reach profitability.

Where do everyday entrepreneurs find money for their startups?

Close to home, often. Those funds might come from savings, current earnings from another job, their spouse’s income, friends and family or a bank loan.

There’s one source of funding, however, you should rule out, says Somes-Booher. “One of the biggest myths is that there’s a grant out there to start your business with,” she notes. “But there isn’t a place where you can apply for a grant and someone will give you a large sum of money.”

Tapping your savings can be tricky. “Typically, people will have some portion of savings they’re willing to risk,” says Somes-Booher. “We don’t often hear people say, ‘I’m going to risk my college fund or my retirement fund,’” she adds. “It’s risky, and I think people understand that.”

Since startup funds need to be readily accessible, small-business experts recommend having the money in cash.

Once the business is up and running, keep your business and personal accounts separate, recommends Donald Duncan of the Chicago-area firm D3 Financial Counselors. “Never commingle them,” he says. Otherwise, “It’s just a lot harder to keep track of whether you’re successful.” (It also makes it easier to answer questions the IRS might have about your personal or business taxes.)

What’s most important is spending a lot of time thinking about your business before you launch it, says Duncan, who started his own independent financial planning firm 20 years ago. “I spent 10 years thinking about it,” he says. “You don’t want to jump off a cliff unless you know there’s water below.”

Write up a business plan — one that will help you articulate all the challenges of launching a business and how you intend to overcome them. This will make it easier to organize your activities, target your marketing efforts, and perhaps even raise money. If you’re intimidated by the idea of sitting down and writing a formal business plan, try, as an alternative, what’s known as the “Business Model Canvas,” a free tool available at Strategyzer.com Opens in a new window. “It’s pretty popular right now for lean startups,” says Michelle Somes-Booher. The one-page Canvas, she notes, is “a great place to take all the ideas that are in your head and put them on paper.”

George Mannes, a former senior editor at Money, has been writing about investing and personal finance since 1998.