After graduating from Indiana University in 2011 with a bachelor’s degree in journalism, I felt uneasy about my employment prospects but confident I could repay my student loans. I had taken out $24,000 and felt assured that my future job would support repayment of that debt. 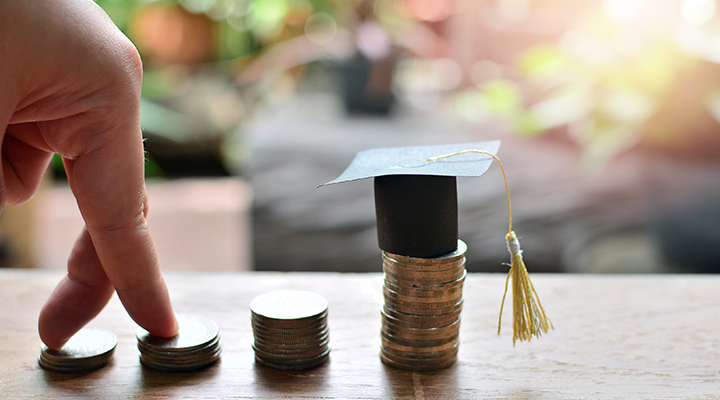 However, when I first started making payments on my student loans, I was dismayed to find that my minimum payment of $350 equaled 20% of my monthly take-home pay. I hated the feeling of being in debt, and I wanted to pay off my student loans in a few years, even though I was only making $28,000 a year.

After rent, utilities, groceries and other necessities, where was I going to find the extra money to pay off my loans quickly?

My first step was adding an extra $10 a month to my student loan payment. I called my provider’s customer service number and asked the representative, “How will that change my payoff timeline?”

Shaving off a year in repayments

She told me my meager addition would lessen my loan term to nine years. So that extra $10 would shave off one full year from my 10-year repayment term.

I went from feeling dejected to feeling inspired. If that’s what $10 a month could do, what could $20 or $40 do? What other small changes could I make to contribute more money to my student loan payments?

I realized if I truly wanted to pay off my loans early on my limited salary, I had to change how much I was spending.

I kept adding only $10 a month extra, but every time I got a windfall, I put most of it toward my loans. Every tax refund, birthday check, freelance assignment—I put 90% of those toward my loans. Once, a family member gave me a check and said I shouldn’t put it toward my loans but should instead have fun with it. Can you guess what I did?

I finally started budgeting and tracking my expenses. I realized that I had to live lean if I wanted to pay off my loans and have an emergency fund.

I couldn’t shop at Sephora when I was bored, or buy things on Amazon when I felt like it. I cut back on eating out, learned to shop at thrift stores and invited friends over for Netflix instead of going out to the movies. I cut coupons, shopped during Goodwill’s 50% off days and asked for samples when I could.

That’s when I really started to see a significant change. Now my payments were affecting the principal, and my balance was going down much faster. This made me feel much more motivated overall. By midyear, my balance was down to just over $17,000.

A year later, I moved in with my boyfriend and a mutual friend. I finally had roommates again, and used the lower rent to throw even more money toward my student loans. I went from paying $625 a month in rent to $266, and also saved on utilities, internet and Netflix.

I was taking home $1,850 a month, and half of my paycheck now went to my loans. When I got my second job and became eligible for their 401(k), I also started saving 6% of my salary for retirement.

This was the first time I had invested my money since college, when I briefly started an IRA. The interest rate on my student loan was 6.55% and I wanted to put every spare dollar toward paying off my debt. But I contributed to my 401(k) because I didn’t want to pass up the employee match.

Because I was now paying about $900 a month toward my loans, debt acceleration happened much faster. In November 2014, I made my last student loan payment.

If I truly wanted to pay off my loans early on my limited salary, I had to change how much I was spending.

I stared at the Nelnet student loan servicer web page, in disbelief that I finally reached my goal. Most people assumed my first reaction would be to go shopping and stop depriving myself of luxuries. But the habits I had learned during the past three years had stuck. I bought a pie from my favorite bakery to celebrate, but that was about it.

As soon as I became debt free, my boyfriend (and then fiancé) and I combined our finances. With my student loans eliminated, we started saving for a six-month emergency fund and our impending cross-country move to Denver. We’d both decided we would quit our jobs in a few months, so we used my freed-up income to save for moving expenses.

Being debt free, I realized how much less I needed to earn. I didn’t have any debt hanging over my head, making me feel guilty for spending money on myself. Debt freedom, I realized, was the best feeling I’d ever had.

What I could have done differently

As proud as I am of my journey, I know I could have done more to pay off my loans faster. Instead of just cutting expenses and living lean, I could have tried harder to earn more money.

“Side hustling really helped boost my debt repayment,” she says. “When I first started side hustling, I was only earning $10 to $12 per hour and wasn't making very much money. I had nowhere I could cut back, and knew that I had to earn more if I wanted to reach my debt repayment goals.”

Lockert worked as a brand ambassador, event assistant, pet sitter, mother's helper and “anything else I could get my hands on.”

At first glance, college debt could seem insurmountable—and even unfair. But if you focus on living on less and earning more, you can turn that mountain into a memory faster than you might think.

Zina Kumok is a freelance writer specializing in personal finance. She has written for the Associated Press, Indianapolis Monthly and more. She also writes a blog about how she paid off her student loans in three years.